Blog - Latest News
You are here: Home / Articles / How to Analyze a Cloud-based Log Quickly in Lawson 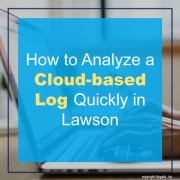 In a Lawson Cloud environment, its difficult to get logs off the server since now you’re likely restricted to FTP access and the latest logs are currently being written to by the server itself, thus throwing a deny exception when trying to download the latest logs from FTP.

I previously made another article on this explaining a work around for this but that takes a few extra steps and time. This is a quicker command line method if you need to test something immediately.

As you see above, this uses the tail command combined with -500 parameter which returns the last 500 lines written to the log. You can change -500 to whatever amount of lines you want to return (the more the longer it takes to load)

The optional piped LASHOW command is to open this in a separate scrollable and searchable window within LID.

This becomes especially useful when testing live forms or code in Lawson.