You are here: Home1 / Nogalis Inc Kicking off 2018, the Lawson user group community held its first event, the 15th Annual West Coast Mega Conference. Bringing together the Pacific Lawson User Group (PLUG), Southern California, Arizona, Nevada Lawson User Group (SCANLUG), and Northern California User Group (INCLU), 19 vendors and over 100 attendees gathered at the Pacific Life building in Newport Beach, California for a 2-day conference on January 23rd and 24th. Attendees chose from over 60 educational sessions covering topics from upgrading to the latest Lawson version, to migrating from on premise to the cloud. Nogalis hosted 2 sessions (Payroll Automation – How we pay 100,000 employees weekly using IPA with no user interaction & How Several Lawson Clients have cut Operational Costs by 35%) with almost 40 attendees, among the largest turnout of any other vendor session.

In recent years, Nogalis introduced their new security product, LSFIQ . The 2018 West Coast User Conference was the first for attendees to see the latest version of LSFIQ. People who visited the booth were given quick demos of the product, signing those interested up for a free version to test out. In return, they would be entered in a drawing for a chance to win a bitcoin wallet valued at over $100. And just for visiting the booth, attendees were given phone hook clips branded with the Nogalis logo to attach to their mobile phones as a handy phone stand and holder. The bitcoin wallet gathered interest; however, the grand prize was the talk of the event. Those who attended either of the Nogalis sessions were automatically entered in a drawing for a chance to win a FREE helicopter ride from local flight school, Revolution Aviation. The ride would include an introductory lesson, a 40 minute – 1 hour tour of Orange and Los Angeles County, and an opportunity to take control of the aircraft in the pilot’s seat! With many of the attendees being Southern California residents, there was no doubt they wanted to get their hands on this amazing experience.

As gold sponsors once again, Nogalis hosted the evening  event at the Marriott hotel, where attendees and vendors enjoyed great food, played casino games, networked with one another, and won raffle prizes. 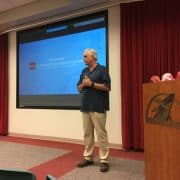 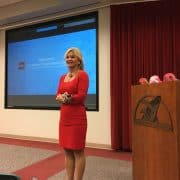 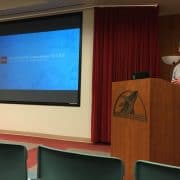 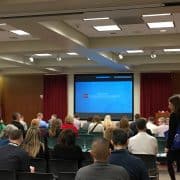 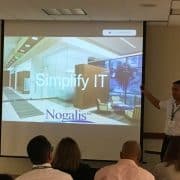 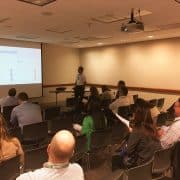 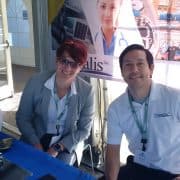 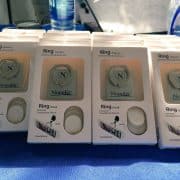 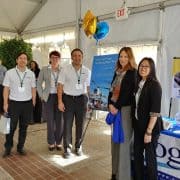 The West Coast Mega Meeting is coming up next month!

at the Pacific Life Insurance Company in Newport Beach, CA

Nogalis is once again a Gold Sponsor of the event! In this short webinar we’ll show you our tried and true methodology for upgrading to version 10 as quickly as possible without making any compromises in quality. We’ll also leave a 30 minute QA session to answer all your questions regarding the upgrade process. 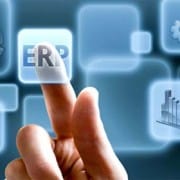 Choosing the right Enterprise Resource Planning (ERP) system can be overwhelming as it can be a key asset to your company. Here are five (5) important factors you should consider when shopping for ERP to find the best system for your organization.

Seek advice from your employees. Not only will they be working on the system on a day-to-day basis, they are best suited to advise on where operational gaps exist and how you can fill them by having your firm choosing the right ERP software. The 13th Annual Midwest Lawson User Group (MWLUG) Summer Conference was held last week, August 19-20, at St. Olaf College in Northfield, Minnesota. With 30 venders and over 400 registered attendees, this two-day event was filled with over 55 informative and interactive sessions covering the latest topics regarding Lawson software and the IT space. Nogalis Inc. hosted a successful session (11 Performance Enhancers for your Lawson Environment), with over 20 attendees at their workshop, among the highest attendance of any workshop that day.

MWLUG was the first event where Nogalis showcased for the first time their newest security product, LSFIQ. LSFIQ is the only cloud-based application that enables you to upload and analyze your Lawson Security data with ease and with no software to install. Simply upload two easy-to-create files into your LSFIQ account and get access to dozens of incredible reports that give you instant, detailed view into your security data. The team held demonstrations of the product at their booth and impressed many with the product’s simple interface and implementation process. Some attendees who were not in the Security or IT aspect of their respective companies complimented how easy it was to understand the product and would recommend it to their IT department after the conference. In addition, whoever tried the LSFIQ demonstration was given a FREE 30-day no obligation trial of the full product at the event.

Attending the conference for the second year in a row, Nogalis Inc. was given a warm welcome by attendees who remembered them from the previous year’s conference as well as the company’s 2014 Summer Upgrade Bootcamp. Throughout both days, Nogalis kept a lively vibe going in the main hall by showcasing their free demos and special giveaways at their vendor booth and handed out crowd-pleasing personalized baseballs with the Nogalis logo stamped on. Attendees were also given a chance to enter exclusive drawings for two great prizes: a pair of one-day general admission tickets to the Minnesota State Fair any day between Aug 27 and Sept 7, and a pair of field box seat tickets to watch the Minnesota Twins play the Detroit Tigers on Sept 15. However, the company’s grand prize created the most buzz throughout the trade show. Those who attended Nogalis Inc’s workshop were entered to win a pair of tickets to see Madonna at the XCEL Energy Center in St Paul, Minnesota on October 8. With her greatest hits playing throughout the vendor hall, this added continued buzz and excitement for Nogalis and all conference goers. 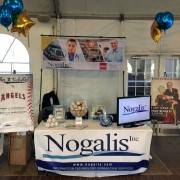 The Southern California, Arizona, Nevada (SCAN) Lawson User Group gathered together last week, April 8-9, at the West Coast Mega User Conference, held at the Pacific Life building in Newport Beach, Ca. With about 100 attendees and 20 vendors, the two-day event was filled with over 45 educational sessions covering almost ever aspect of Lawson software and the IT space. Nogalis was successful hosting 2 sessions (9 Performance enhancers for your Lawson Environment & 5 Things you need to know before you move to the cloud) with 25 attendees at each workshop, the largest of any session from both days.

Nogalis did a great job of keeping an energetic vibe going throughout the conference by showcasing their services and special giveaways at their vendor booth. They had an interactive “Guess how many baseballs there are in the jar” contest for a chance to win Los Angeles Angels of Anaheim home game baseball tickets. And just for signing up, the team gave away personalized baseballs with the Nogalis logo stamped on. As for the grand prize, which turned many heads, those attendees that sat at one or both workshops were entered in a drawing for two tickets to see Lady Gaga and Tony Bennett live at the Hollywood Bowl. This event was the talk of the conference as songs of the duo’s greatest hits were playing at the vendor hall, adding continued buzz and excitement at the Nogalis booth.

Guess How Many Balls in the jar

The 13th Annual West Coast Mega Conference is coming up next month!

at the Pacific Life Insurance Company in Newport Beach, CA

Nogalis is once again a Gold Sponsor of the event!