You are here: Home / best practice 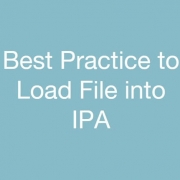 The Data Iterator node is commonly used to loop through records but it can also read a file into IPA. (For more on the Data Iterator Node, visit: https://www.nogalis.com/2017/05/04/ip-designer-series-the-data-iterator-node/)

Based on the responses of seasoned IPA developers on the Infor/Lawson forums, the best way to ‘load’ in a file to an IPA flow is to use a FileAccess node followed by a DataIterator node. This speeds up the flow considerably as the FileAccess node would read the file into memory and then the DataIterator node can use the data from the memory instead of reading and closing the file multiple times.

First ‘load’ or ‘read’ the file into IPA using the FileAccess node. Then set DataIterator to process the Data (and not File) and set the source to be the FileAccess_outputData. This should noticeably improve the performance of the flow as the data is just being loaded into memory once by the FileAccess. 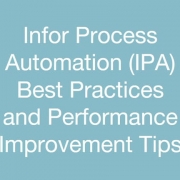 Since Infor Process Designer is an open-ended visual design tool, different users can achieve the same end goal but in many different ways. While the flow might technically “work”, this level of design freedom usually leads to processes that are not as efficient as they could potentially be.

Here are some tips to keep in mind as you design your next flow: